While placing 18 eggs one by one in a pot of boiling water, one egg quickly slipped out of my hand and landed on the kitchen floor. Splat!!!

As the yolk partly laid on the floor and partly resting inside the shell, I thought it looked disastrous but also colorful and pretty. 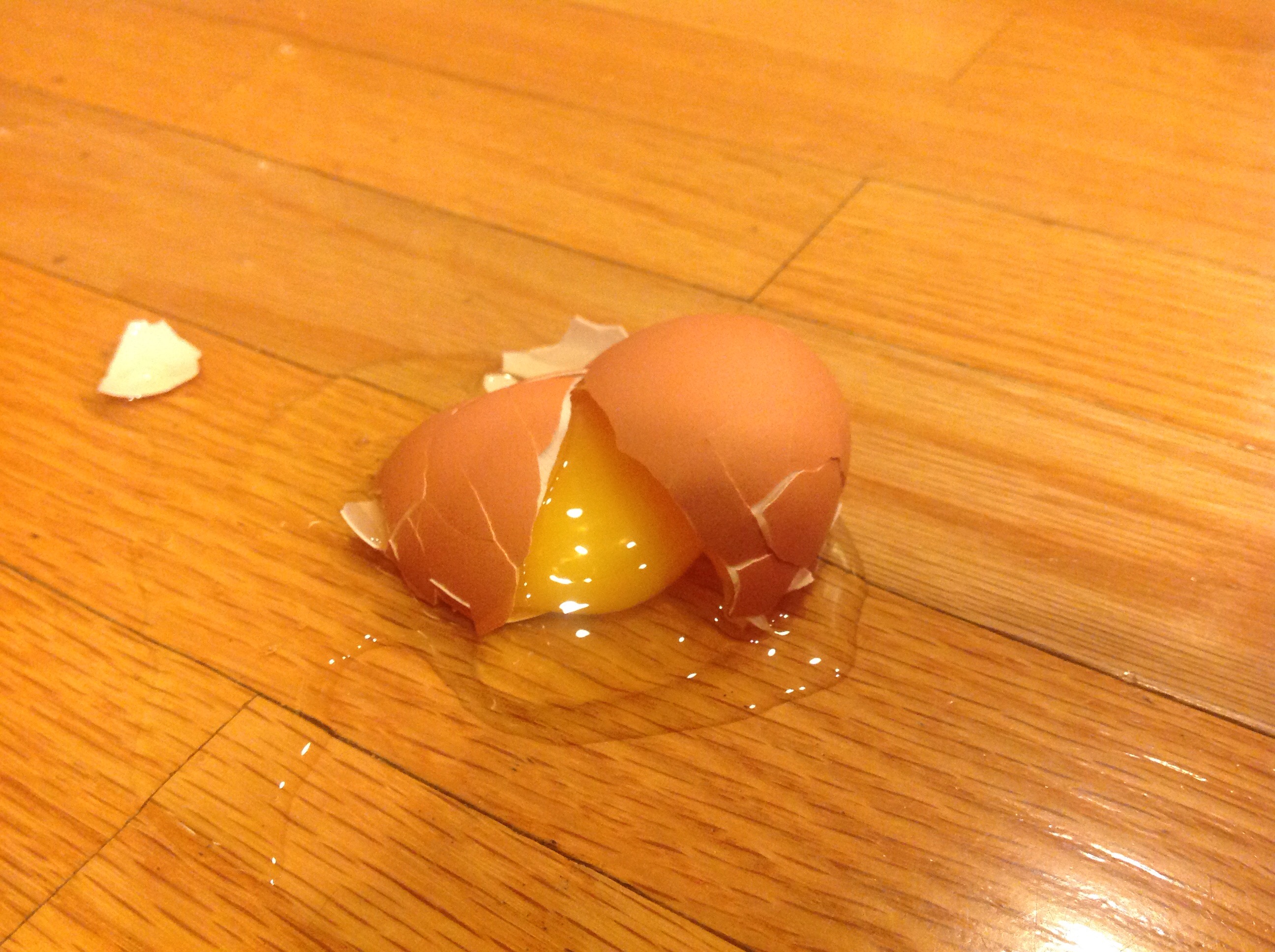 Instead of stressing over the silly egg, I took a few pictures and pondered over what could be said about the broken egg.  The splattered egg reminded me of an earlier experience in my life and inspired me to write this post.

Nearly 20 years ago, I was the Advertising/Communications Manager at a Casino in Atlantic City, New Jersey.

I was new to the position and new to advertising, but I loved the creative energy, the enthusiasm, and the department’s director was amazing! She was smart, witty, confident, and knew her stuff. I was like a sponge, eager to soak up all the knowledge my director was throwing my way. For once, I envisioned myself in a department for the long hall.

While working as a Trainer in Human Resources, the  job literally fell in my lap. It turns out, the powers that be were observing me and liked the way I conducted myself and worked with employees in the company.

Seven months into the Advertising position, out went the old president and in came the new one. As with any new leadership, the rumors began.  For or a little while, things remained the same, but eventually major changes occurred.

The new president (Dennis) may he RIP, passed a few years ago, was unlike any leader our company had before. He was high energy, unconventional, believed in giving people chances, and never seem to care about people laughing at his out of the ordinary ideas.

I remember attending a pep rally, where some employees won a lottery for a chance to step into a money machine! The machine swirled money into the air and the employee was given a certain amount of time to grab as much cash as possible. Lol!! How cool was that! You can imagine the excitement!!

Anyways, he had a new vision for the company and wanted to move in a different direction. As a result, my position along with 120 or so other jobs were eliminated. I was disappointed but not surprised. Damn though!! I was finally working for and with someone who really knew shit and was willing to share her knowledge.  Then my position gets eliminated.

I signed the proper  paperwork, packed my belongings, said my goodbyes and left. On my way out, I saw my colleagues’ devastation and tears. I remember thinking, it’s not the end the world. Of course my husband held a steady job, but still we were a two-family income and my salary mattered.

After a few days of taking the job loss in, I felt compelled to write a letter to the president. I was confused! During the pep rally, Dennis spoke. He said he wanted employees who were loyal, hard-working, committed, friendly, and more!

He described me in his speech! So, why was my job eliminated? I needed to know the answer, so immediately I sat down and wrote the president of the casino a letter. I did not hesitate on the letter because I felt as though I had nothing to lose.  My letter was not angry, dispirited or nasty.  It was a letter of genuine inquiry about why my position was eliminated. I also requested a meeting with him to discuss career opportunities with the company. I told him that I was everything he wanted in his employees and he could check my file. He seemed like a fair and reasonable man.

The next day, I hand delivered the letter to his Administrative Assistant, who graciously took it and promised that she would give it to him. I thanked her and left feeling content that I asked the question.

Shortly after, I don’t remember exactly how long but a day– a week– or several weeks later, I received a phone call from a company representative. Although while working full-time, I also attended college at night. I was offered a position as an intern in Affirmative Action.

I worked in Affirmative Action for a few months and was eventually offered a job in a new department, Quality Assurance. For a few months, I was the sole department. Lol!!

Over the next eight years, my career continued to flourish with the company.  In 2002, one month after I graduated college and earned my BA degree, I received a job offer from a local school district and gave my resignation.

Just because a situation does not go as planned, does not mean that all is gloom and doom and that a disaster has occurred.  There is always a reason things don’t work out but to sort through it, we have to be open-minded, patient, and malleable.

So what the egg breaks! It’s still raw, scoop it up, laugh at yourself, salvage what you can, and move on. Successful people arrive by way of a series of detours, road blocks, failed engines and more.

If you’ve ever played  Monopoly, at some point you will land in jail. Eventually you get out of jail and move on and sometimes, go on to win the game.

Learning not to stress over cracked eggs, broken china, the slow driver ahead, junior league football, and other trivial stuff, took me many years to understand.  However, one day I figured it out and and stopped sweating the small stuff.

I know that after bad comes good. After darkness comes light.  After pain comes pleasure.  After tears come smiles.

At 50 years old, I take it all in stride and make it a point to laugh at the silliness in each day.